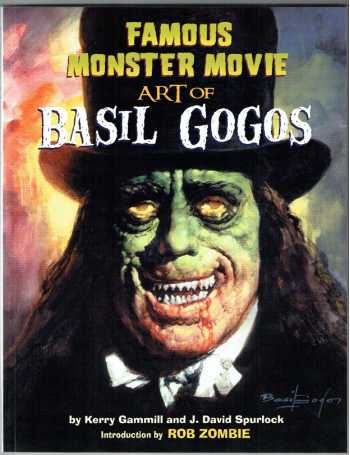 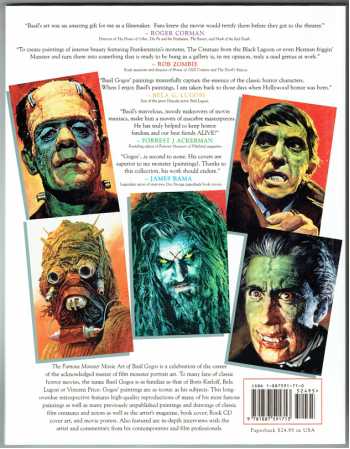 The first and only monograph dedicated to the famous monster artist. Introduction by Rob Zombie.

The Famous Monster Movie Art of Basil Gogos is a celebration of the career of the acknowledged master of film monster portrait art. To many fans of classic horror movies, the name Basil Gogos is as familiar as that of Boris Karloff, Bela Lugosi or Vincent Price. Gogos' paintings are as iconic as his subjects. This long-overdue retrospective features high-quality reproductions of many of his most famous paintings as well as many previously unpublished paintings and drawings of classic film creatures and actors. Gogos' early work in men's adventure magazine and paperback book art will also be examined as well as his works in movie posters and other areas. An in-depth career-spanning interview with the artist will accompany the illustrations and tributes by other artists and film professionals inspired by Gogos' powerful images. The book will feature an introduction by rock star, movie director and horror collector Rob Zombie.

The "monster craze" among baby-boomers, sparked by the release of Universal Studios' horror classics to television in the late '50s, gave birth to a new phenomenon -- the monster magazine. Famous Monsters of Filmland, filled with monster photos and articles on horror movies and their stars, was the premier publication for young horror film fans.

Issues of the new magazine practically leapt off the newsstand shelves and into kids' hands due in no small way to their striking cover paintings by Basil Gogos. Like a Bizarro world Norman Rockwell, his stylish portraits of horror film characters and stars were seen on magazine covers throughout the '60s and '70s. Gogos' interpretations of movie monsters like Frankenstein, The Creature from the Black Lagoon, and the Phantom of the Opera, breathed new life into the old black and white images. His amazing use of color and bold, impressionistic brushwork gave a sense of both excitement and sophistication to his paintings which has never been matched.

Gogos' legend as the world's greatest movie monster artist has only grown over the years. His original Famous Monsters cover paintings are highly sought-after and are in the collections of many filmmakers and rock stars on whom he made a lasting impression. In recent years he has been in much demand by producers wishing to capture the unforgettable look and feel of the classic monster art of the '60s. CD and DVD covers, movie posters, trading cards, book covers and new monster magazines continue to keep Basil Gogos the world's greatest monster artist.