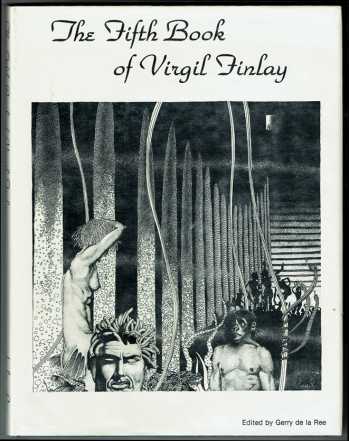 Virgil Finlay's first professional magazine sales were made to Weird Tales in 1935. He made his debut in the December issue with four drawings purchased by editor Farnsworth Wright. Finlay became a regular contributor to the magazine in 1936, and in the next three years assumed the mantle of No. 1 artist.

Because the illustrations in Weird Tales suffered from poor reproduction, only a limited number of them - originals in private collections - have been reprinted successfully. Perhaps it was editor Wright's own dissatisfaction with the poor quality reproduction afforded the work of Finlay that prompted him to keep a looseleaf scrapbook of printers proofs of many of the artist's better drawings from the 1936-1939 period. It was the recent discovery of this material that led to the publication of this book, the first ever completely devoted to Virgil Finlay's illustrations from Weird Tales.

This book combines Wright's proofs and those original drawings available to us. Included are many of the poetry pages Finlay did between December, 1937, and May, 1940. There are also the drawings for stories by such Weird Tales regulars as H. P. Lovecraft, Robert Bloch, Seabury Quinn, Edmond Hamilton, Clark Ashton Smith, Thorp McClusky, and Robert E. Howard.

Finlay left Weird Tales in 1940 about the same time Wright was replaced as editor and died. Virgil did not return to the magazines pages until 1952. He remained a regular contributor until the last issue in September, 1954. His final drawing was one for his own poem, "Moon Mist".

Finlay sold some 200 illustrations to Weird Tales, but this was only a small part of his artistic output. He also worked for The American Weekly and was a regular contributor to such fantasy and science fiction magazines as Famous Fantastic Mysteries, Fantastic Novels, Thrilling Wonder Stories, Startling Stories, Amazing Stories, Fantastic Adventures, Galaxy, and If.

From 1956 until his death in 1971 he illustrated for Astrology magazine.