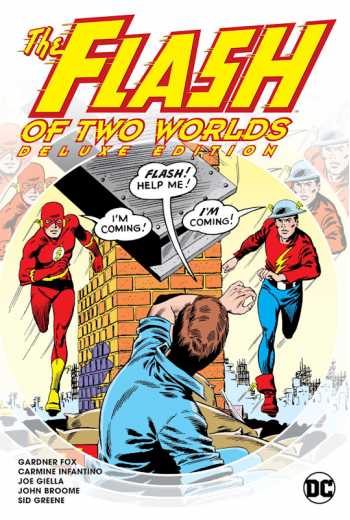 The birth of the Multiverse begins here!

In the classic tale The Flash of Two Worlds from The Flash #123, police scientist Barry Allen--also known as the Silver Age Flash--finally meets his Golden Age predecessor Jay Garrick--the original Scarlet Speedster--and the destiny of the DC Universe changes forever!

This unprecedented meeting of the Fastest Men Alive marked the beginning of DC's famous multiple Earths, with Barry's world becoming Earth-1 and the world of Jay and his fabled teammates from the Justice Society of America becoming Earth-2. From these humble beginnings would grow the vast DC Multiverse that we know today--home to the greatest and most iconic superheroes in comics history!

Born in 1911 in Brooklyn, New York, Gardner Fox was probably the single most imaginative and productive writer in the Golden Age of comics. In the 1940s, he created or co-created dozens of long-running features for DC Comics, including the Flash, Hawkman, the Sandman, and Doctor Fate, as well as penning most of the adventures of comics' first super-team, the Justice Society of America. He was also the second person to script Batman, beginning somewhere around the Dark Knight Detective's third story. For other companies over the years Fox also wrote Skyman, the Face, Jet Powers, Dr. Strange, Doc Savage and many others--including Crom the Barbarian, the first sword and sorcery series in comics. Following the revival in the late 1950s of the superhero genre, Fox assembled Earth's Mightiest Heroes once more and scripted an unbroken 65-issue run of Justice League of America. Though he produced thousands of other scripts and wrote over 100 books, it is perhaps this body of work for which he is best known. Fox passed away in 1986.

The man most closely associated with the Silver Age Flash, Carmine Infantino began working in comics in the mid-1940s as the artist on such features as Green Lantern, Black Canary, Ghost Patro, l and the original Golden Age Flash. Infantino lent his unique style to a variety of superhero, supernatural, and Western features throughout the 1950s until he was tapped to pencil the 1956 revival of the Flash. While continuing to pencil The Flash, he also provided the art for other strips, including Batman, The Elongated Man and Adam Strange. Infantino became DC's editorial director in 1967 and ultimately its president before returning to freelancing in 1976. Since then he has penciled and inked numerous features, including the Batman newspaper strip, Green Lantern Corps, and Danger Trail.