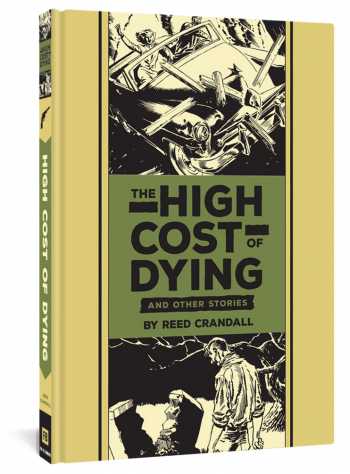 Reed Crandall's mastery of fine line detail and expertly nuanced pen-and-ink texture is a perfect fit for EC Comics. This collection of 21 Crandall favorites, delineated in his classically illustrative style, includes "The Silent Towns," a Ray Bradbury story about the last man and woman on Mars; "Carrion Death," a stark horror story about a man struggling through the desert with a corpse handcuffed to his wrist as the vultures circle closer; "Sweetie-Pie," the grisly story of a ghoul who sets up a roadside hazard to procure, um, fresh meat; "The Kidnapper," about a man who decides to kidnap a baby to replace the baby that had been stolen from him and his wife; "Space Suitors," a science fiction love triangle that leads to jealously, betrayal, and murder, and "The High Cost of Dying," the title story, in which a man must make an awful choice between burying his wife and feeding his children ...

Reed Crandall (1917-1982, Indiana) is best known for his art for EC--and later Warren's--horror, crime, war, and adventure comics; he also contributed to Flash Gordon in the 1960s. Some of his more family-friendly work was featured in the Classics Illustrated and Treasure Chest series; he drew the Buster Brown comics for Buster Brown shoe stores for many years. He attended the Cleveland School of Art in Ohio, graduating in 1939, and served briefly in the Air Force during WWII--which served him well as one of the primary artists for the aviator-team comic Blackhawk. Crandall was inducted into the Jack Kirby Hall of Fame in 1998 and the Will Eisner Hall of Fame in 2009.