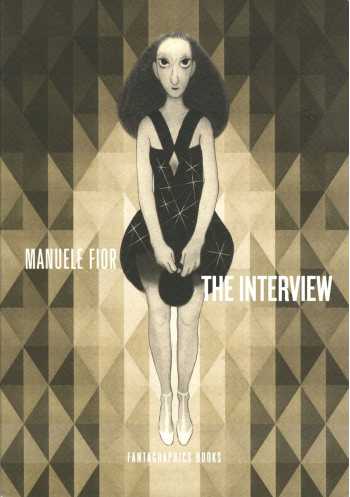 An English language edition of this 2013 European graphic novel.

The Interview is the second graphic novel by Manuele Fior, author of the critically acclaimed and international award-winning debut 5,000 KM per Second. Set in Italy in 2048, it follows Raniero, a fifty-something psychologist in a failing marriage. In the sky, strange bright triangles appear, bearing mysterious messages from an extraterrestrial civilization. Dora, his young patient, is part of the New Convention, a movement of young people preaching free love and alternative models to coupling and family. She declares that her telepathic abilities can parse the signal -- a warning of some kind. Initially skeptical, Raniero's curiosity and attraction grows. The Interview is a science fiction novel that eschews the stars in favor of the delicate, fragile, interior world of human emotion. It is a moving story about the passage of time, the commonalities and differences between generations, and on our changing society. "I tried to imagine the near future, but slightly different from the present," says the author. "A scenario where not everything is negative and catastrophic, where the end of the world and of society as we know it does not come with a violent apocalypse, but rather an intimate and familiar context of daily life that keeps flowing."

Manuele Fior was born in Cesena, Italy in 1975. After earning a degree in architecture (Venice, 2000), he moved to Berlin, where he began a career as a cartoonist (5,000 km per Second, The Interview), illustrator (The New Yorker, Le Monde, Vanity Fair), and architect. He lives in Paris.