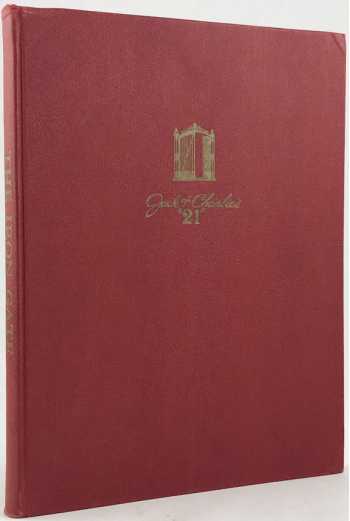 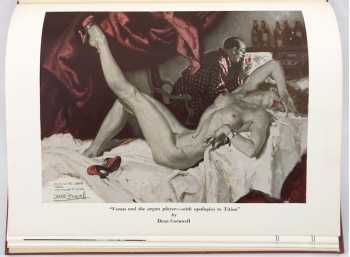 The Iron Gate of Jack & Charlie's "21"... a vivid portrayal of a unique institution -- by a distinguished group of authors, artists and celebrities. Issued on the twenty-fifth anniversary of the founding of "21," in memory of John Carl Kriendler to benefit the New York Heart Association.

J. J. Sedelmaier in Print wrote: In 1936, the former speakeasy and NYC restaurant-club, Jack & Charlie's "21" (what we now know as The 21 Club) published, "The Iron Gate." Compiled as a self-promotional tool, this 194-page leather-spined volume featured the articles and illustrations of many of the establishment's famous clientele. It also served as an opportunity for advertisers to promote their association with the venerable Manhattan institution. The book is like a vintage Society Of Illustrators annual, or a "Dutch Treat Yearbook." It contains lots of tasty drawings -- all done especially for the publication. In 1950, "The Iron Gate" was revised and re-issued to act as a memorial to Jack Kriendler, one of the two original owners who'd recently passed and also to commemorate the 25th year of the restaurant's founding. Although some of the original illustrations and articles were included, most of the revised edition is new material. It's also interesting to see how much the motion picture industry had become a part of the mix.