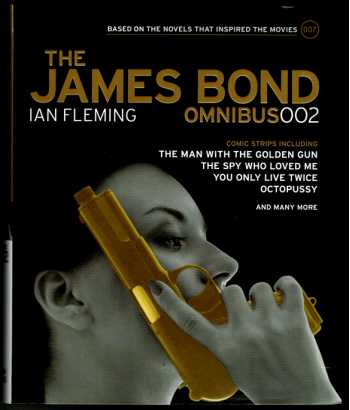 A thick collection of the British comic strip adapting the original Ian Fleming novels and stories.

Seven of Bond's most thrilling and dangerous missions appear in a single volume: On Her Majesty's Secret Service, You Only Live Twice, The Man With the Golden Gun, The Living Daylights, Octopussy, The Hildebrand Rarity and The Spy Who Loved Me!

In 1958, just five years after Fleming published the first James Bond novel and long before the supersuave spy became a worldwide phenom, Britain's Daily Express began running comic-strip versions of the Bond novels and occasional short stories. The strip presented the stories in publication chronology, boosted the newspaper's sales, and is said to have contributed greatly to the British Bondmania that prompted the long-lived movie series. The comic ran original stories after exhausting the Fleming originals and thus continued to 1983. These visual condensations follow the originals' story lines to a far greater extent than did the frequently outlandish films.