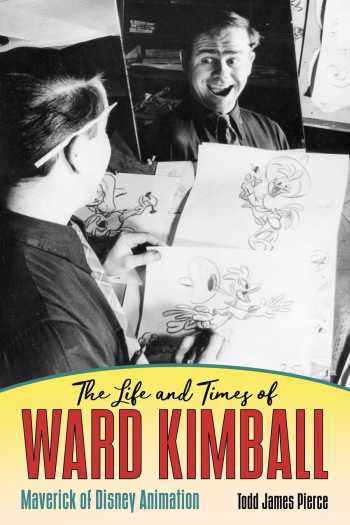 Besides Walt Disney, no one seemed more key to the development of animation at the Disney Studios than Ward Kimball (1914-2002). Kimball was Disney's friend and confidant.

In this engaging, cradle-to-grave biography, award-winning author Todd James Pierce explores the life of Ward Kimball, a lead Disney animator who worked on characters such as Mickey Mouse, Donald Duck, Jiminy Cricket, the Cheshire Cat, and the Mad Hatter. Through unpublished excerpts from Kimball's personal writing, material from unpublished interviews, and new information based on interviews conducted by the author, Pierce defines the life of perhaps the most influential animator of the twentieth century.

As well as contributing to classics such as Snow White and the Seven Dwarfs and Pinocchio, from the late 1940s to the early 1970s, Kimball established a highly graphic, idiosyncratic approach to animation alongside the studio's more recognizable storybook realism. In effect, Ward Kimball became the only animator to run his own in-studio production team largely outside of Walt Disney's direction. In the 1950s and 1960s, he emerged as a director and producer of his own animation, while remaining inside Disney's studio.

Through Kimball, the studio developed a series of nonfiction animation programs in the 1950s that members of Congress pointed to as paving the way for NASA. The studio also allowed Kimball's work to abandon some ties to conventional animation, looking instead to high art and graphic design as a means of creating new animated forms, which resulted in films that received multiple Academy Award nominations and two awards.

Throughout his life, Kimball was a maverick animator, an artist who helped define the field of American animation, and a visionary who sought to expand the influence of animated films.

Praise for the book

The Life and Times of Ward Kimball is the most in-depth biography ever written about any Disney artist. Despite the tremendous amount of details (most of which are new even to me) the material is presented in such a compelling way that one cannot stop reading and going from discovery to discovery. (Didier Ghez, author of Disneyland Paris: From Sketch to Reality; Disney's Grand Tour: Walt and Roy's European Vacation, Summer 1935; and of the They Drew as They Pleased book series)

The Life and Times of Ward Kimball is a valuable and groundbreaking book. It deals comprehensively with aspects of Ward Kimball's long and varied life that have not been examined with any thoroughness before, specifically his roles as a popular jazz musician and a celebrated connoisseur of vintage railroad rolling stock. That Kimball was able to pursue such interests while cementing his reputation as one of Walt Disney's most skilled and creative animators and directors is truly remarkable. (Michael Barrier, author of The Animated Man: A Life of Walt Disney and Hollywood Cartoons: American Animation in Its Golden Age)

Todd James Pierce lives in a town called Orcutt, California, which is in the northern portion of Santa Barbara County. He is the author or co-author of eight books, including Newsworld, which won the Drue Heinz Literature Prize. His work has been published in over 80 magazines and literary journals, including The Georgia Review, The Gettysburg Review, Harvard Review, Indiana Review, The Iowa Review, The Missouri Review, North American Review, VQR, and Willow Springs. His most recent book is Three Years in Wonderland, which tells the story of Walt Disney and the birth of the American theme park industry.