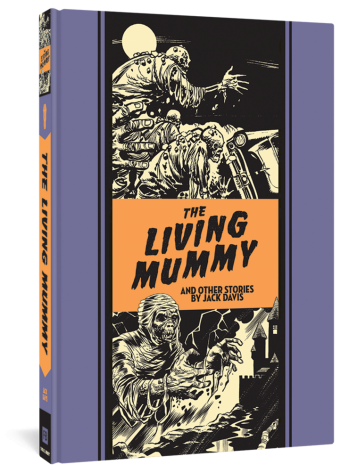 When Jack Davis took up his pen for EC Comics, he made his innocent victims more eye-poppingly terrified, his ax-murderers more gleefully gruesome, and his vampires and werewolves more bloodthirsty and feral than any other artist. These horror and suspense tales--from the pages of Vault of Horror, Haunt of Fear, Crime SuspenStories, and Shock SuspenStories--offer everything a horror fan could ask for: re-animated bodies and body parts, a ghoul who stores bodies like a squirrel stores nuts, a vampire who moonlights at (where else?) a blood bank, greedy business partners, corrupt politicians, jealous lovers, revenge from beyond the grave, and a healthy complement of vampires, werewolves, and assorted grotesqueries. All leavened with the cackling, pun-laced humor of scripter Al Feldstein and illuminated as only the virtuoso brushwork of Jack Davis can present them.

One of America's most beloved and best known illustrators, Jack Davis was born on December 2, 1924 in Atlanta, Georgia. He passed away in 2016.