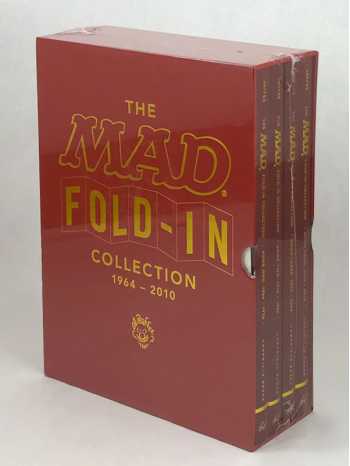 Al Jaffee's fold-ins, on the inside back cover of virtually every issue of MAD Magazine since 1964, have become an icon of American humor. Generations have grown up with Jaffee's inspired skewerings of our foibles and cultural conundrums. Issue after issue, each Fold-in requires the reader to simply fold the page so that arrow A meets arrow B to reveal the hidden gag image, a simple idea that masks both undeniable artistic ingenuity and comic timing. In this deluxe four-volume set, each of the 410 fold-ins is reproduced at its original size, with a digital representation of the corresponding "folded" image on the following page (so collectors won't have to "fold" their book to get the jokes). Featuring insightful essays by such luminaries as Pixar's Pete Docter and humorist Jules Feiffer, The MAD Fold-In Collection is the definitive gift for the millions of fans who've grown up with MAD for nearly 60 years.

Al Jaffee began his career in comics in 1941, and is the creator of the innovative MAD fold-in. Pete Docter is the Oscar-winning director of the celebrated Pixar films, Monsters, Inc. and Up. Jules Feiffer is a Pulitzer Prizewinning cartoonist, author, and playwright. Neil Genzlinger is a cultural critic for the New York Times.

Watch a video preview of The Mad Fold-In Collection 1964-2010 from Chronicle Books: