Sign in | Register
HomeNew ArrivalsThe Making of Star Wars: Return of the Jedi
Save 24% 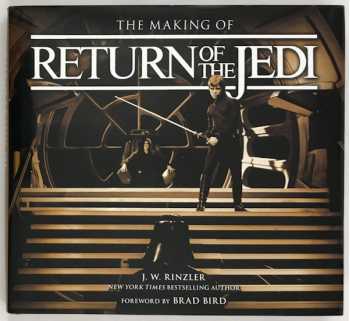 A sharp first printing of a heavy book often found in lesser condition even when "new."

The definitive story of the film and a treasure trove of production art and behind the scenes photos. Foreword by Brad Bird.

Once again, the author's unprecedented access to the formidable Lucasfilm Archives has yielded a mother lode of extremely informative, vastly entertaining, and often unexpected stories, anecdotes, recollections, and revelations straight from the closely guarded set of a big-screen blockbuster in the making. Brimming with previously unpublished photos, production artwork, script excerpts, exclusive intel, vintage on-set interviews, and present-day commentary, The Making of Star Wars: Return of the Jedi chronicles "how George Lucas and his crew of extroverted artists, misfits, and expert craftspeople roused themselves to great heights for a third time" to create the next unforgettable chapter in one of the most beloved sagas of all time. Get up close to the action and feel like a studio insider as

Praise for The Making of Star Wars: Return of the Jedi

"Just like Rinzler's 2010 volume about Empire Strikes Back, The Making of Star Wars: The Return of the Jedi is an indispensible volume that will add tons of insight to your appreciation of George Lucas' Original Trilogy. Rinzler has gone through masses of production documents at Lucasfilm and interviewed tons of people, and come up with a portrait of Lucas struggling to find a fitting ending to his ambitious, heroic saga."--io9