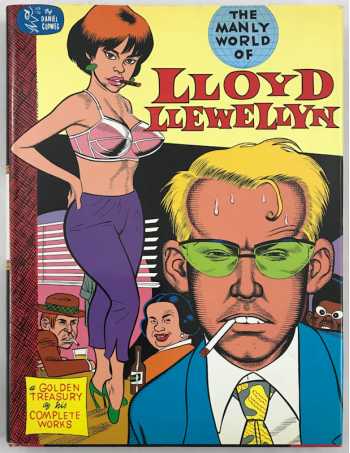 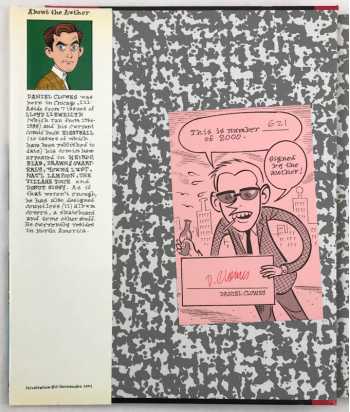 The limited hardcover edition signed & numbered by Clowes on a bookplate attached to the front endpaper.

Before Eightball, there was Lloyd Llewellyn. Long out of print, the early issues of Daniel Clowes' first comic book series have been virtually unseen by all but the lucky few - until the appearance of this turgid encyclosaurus collecting all of the more than 30 LLL stories in a deluxe hardcover-only edition with introduction and annotations by the author.

Lloyd Llewellyn (1986-1988), one of the earliest works of Eightball author Daniel Clowes, anticipated the 1990s rediscovery of lounge culture. The 31 stories collected here combine Dragnet with The Twilight Zone with Tales from the Crypt in a world filled with aliens, good-time girls, and cocktail-bar nihilism. The stories are hip and funny, with a good dose of wacky 1950s paranoia and the kind of tongue-in-cheek morality that characterized the old E.C. horror comics. The Lloyd Llewellyn stories also trace the development of Clowes's style as a comic artist, from the angular early pieces that show the influence of 1950s advertising style to the grotesque Robert Crumb-inspired style of the more recent work in Eightball. Clowes is one of the most gifted comic-book artists around, and the retro-chic world of Lloyd Llewellyn deserves to be seen by a new generation of readers.

Near Fine in Near Fine dustjacket (spotting on top edge, light shelfwear, mild wear and yellowing to dustjacket)
#621 of 2000 numbered copies signed by the artist