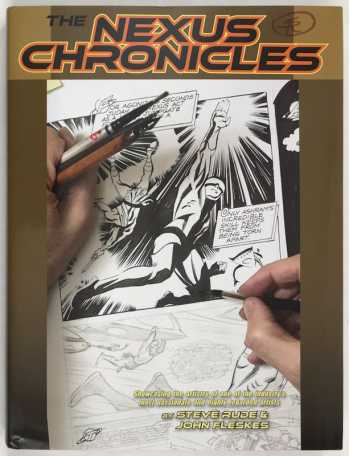 For more than thirty years, the comic-book series Nexus has showcased the artistry of Steve "The Dude" Rude, one of the industry's most passionate and highly regarded artists. Rude's continuing dedication to improving his craft through daily practice and the study of his heroes--Jack Kirby, Alex Raymond and Hal Foster and such illustration masters as Andrew Loomis and John Gannam--have infused his art with a combination of grace, power and finely crafted storytelling.

The Nexus Chronicles focuses on Rude's role as artist and co-creator of this award-winning series. Three dedicated years have gone into assembling the original art for eight of The Dude's favorite creations, including Nexus: Wages of Sin #1 and Next Nexus #1, both of which are shown with their pencil and finished inked forms facing one another to highlight the process. Nexus #50 and the rarely seen eight-page "All in Sundra" are reproduced from their inked originals. Also featured is the previously unpublished Nexus #99 in pencil form and the fully painted Sundra story "When She Was Young," and more. Each issue has been meticulously scanned directly from The Dude's personal archives.

Every chapter opens with a spotlight on Steve Rude's painted covers and supplemental drawings taken from his sketchbooks. These openings highlight concept drawings, preparatory thumbnails and cover-color compositions, following an introduction by the artist. An expanded interview offers insight into his craft, and photographs by Greg Preston show Rude working in his studio.

The Nexus Chronicles reproduces Steve Rude's finest comics like never before, allowing fans and students alike to study the nuances of his line art.