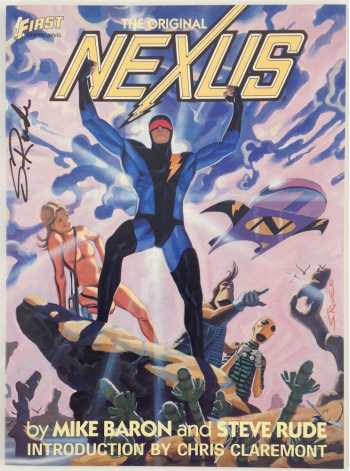 On the distant moon of Ylum, an enigmatic man is plagued by nightmares. He is forced to dream of the past. He dreams of real-life butchers and tyrants, and what they have done. And then he finds them, and kills them.

The year is 2841, and this man is Nexus, godlike figure who acts as judge, jury, and executioner for the vile criminals who appear in his dreams. He claims to kill in self-defense, but why? Where do the visions come from, and where did he get his powers? Though a hero to many, does he have any real moral code?

These are but some of the questions that reporter Sundra Peale hopes to have answered.

Fine
Signed by the artist on the cover