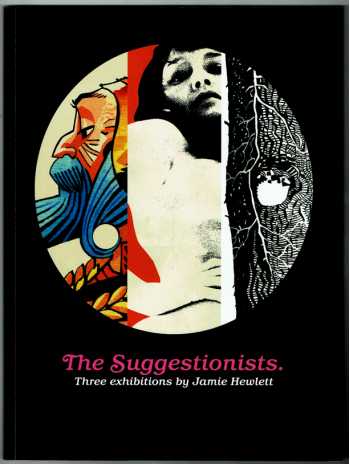 Presenting three brand new bodies of work, "The Suggestionists" exhibition reveals an entirely different side of Jamie Hewlett's many talents, albeit one that is still streaked with the same inimitable sense of wit and mischief with which he has made his name.

Following on from decades of gleeful graphic art rebellion, during which he cultivated a post punk phenomenon with the comic "Tank Girl" and founded the Gorillaz, the world's first virtual pop band with Blur's Damon Albarn, "The Suggestionists" finds Hewlett turning his talents to fine art. Hewlett guides the viewer through a psychogeographic journey that is by turns hallucinatory and dreamlike, illicit and subversive, all linked through the tantalizing power of suggestion.

TAROT, Hewlett's idiosyncratic, breathtaking interpretation of the world of tarotica. Extrapolating from magic realist Chilean art film auteur Alejandro Jodorowsky's reconstruction of the original Tarot de Marseille - which he considers the one true Tarot - Hewlett has produced 22 larger than life Tarot cards, reconciling Jodorowsky's uniquely psychoshamanic sensibilities with his own distinct stylistic signature. In Hewlett's playful, beautifully rendered appropriation, familiar looking creatures clamber over "La Roue De Fortune", the finely detailed expressions of the characters in "L'Amoureux" belie the romantic dilemma the young man faces, a trademark monkey even replaces the traditional dog in "Le Mat"; it's a welcome intrusion of sly absurdity into the arcane and divine.

The viewer is then enveloped in thrilling darkness for HONEY, as Hewlett reveals his frisky homage to the exploitation movies of the 60s and 70s. With a taste of the series of giant lightboxes providing the only source of illumination, akin to the deliciously sleazy ambiance of an adult cinema lobby, Hewlett completing the atmospheric hat trick by creating fake vintage movie posters which use gloriously trashy directors such as Russ Meyer and Terry Southern as an irreverent jumping off point before careering recklessly in his own direction. Revolving around the fictional character of "Honey", Hewlett draws deeply from the lexicon of B-movie language to create posters which are audacious, saucy and, at the same time, deeply authentic - right down to the affectionately rude credits.

From the nocturnal to diurnal then, as Hewlett brings the viewer blinking into the daylight with PINES, the final, most lyrical part of this exciting new series. Featuring extraordinarily detailed illustrations of trees Hewlett observed while in the south of France, these large-scale drawings may look simple, but are in actuality astonishingly meticulous - almost photo realist - in execution and highly evocative, conjuring a heady, magical, bucolic landscape with all the wide-eyed innocence of a fairytale. It is a fitting finale to a show in which hetereogeneous images of the conscious and unconscious, everyday and fantastical, all occupy the same space, emphasizing how strictures can be undermined or heightened simply by the power of suggestion.