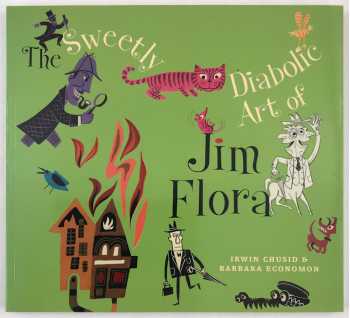 "A third collection of amusing nightmares from the demonic wand of Jim Flora.

"Jim Flora (1914­-1998), long admired for boisterous 1940s and '50s record cover illustrations and a later series of best-selling children's books, has been rediscovered in recent years as an alchemist of bizarre and politely disturbing imagery. The Sweetly Diabolic Art of Jim Flora burnishes the reputation of one of the great overlooked paintbox fantasists of the twentieth century.

"Like its two predecessors (The Mischievous Art of Jim Flora and The Curiously Sinister Art of Jim Flora), this anthology celebrates a visionary whose work is steeped in vari-hued paradox. Flora's figures are fun while threatening; playful yet dangerous; humorous but deadly. His helter-skelter arabesques are clustered with strangely contorted critters of no identifiable species, juxtaposed amid toothpick towers and trombones twisted into stevedore knots. Down his streets lurch demonic mutants sporting fried-egg eyes, dagger noses, and bonus limbs. Yet, despite the raucous energy projected in these hyperactive mosaics, a typical Flora freak circus often projects harmony and balance -- an ordered chaos.

"Like the first two volumes of Floriana, The Sweetly Diabolic Art of Jim Flora features paintings, drawings, and sketches from the 1940s through the 1990s -- many never previously published or exhibited; more artifacts from the artist's 1940s tenure in the Columbia Records art department; and vintage newspaper and magazine illustrations.

"This collection also heralds the first publication of an early, abandoned book for youngsters, "The X-Ray Eye of Wallingford Hume," which Flora drafted in 1943. Equally fascinating are original roughs, overlays, and concept images for his 1950s and '60s published kid-lit. In a curious inversion from art to objet d'art, these partial illustrations -- intended to be layered for a printer's composite -- are impressive, in their curious minimalism, as stand-alone masterpieces.

"A gallery of 1940s pen and pencil sketches invokes a catacomb of nightmarish apparitions and inscrutable petroglyphs. Sweetly Diabolic also collects for the first time between covers a sideshow of science widgetry from a short-lived, now-obscure mid-1950s monthly, Research & Engineering, for which Flora served as art director. Chronicles of Flora's career, personal vignettes, and mementos from the family archives augment the images.

"Although a lot of his work appears cartoonish, Flora didn't draw comics. He always projected a veneer of sophistication that elevated his images to the level of fine art, even when grinding out topical illustrations for newsstand weeklies. Flora deftly merged the well mannered with the maniacal  eyeball jazz that bops and bounces in unfathomable meters."