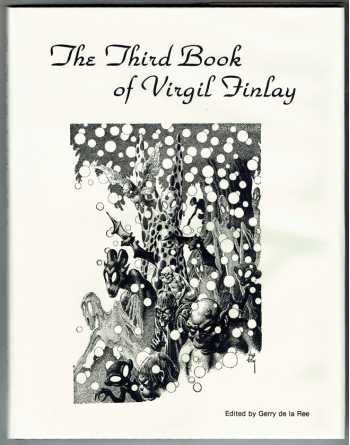 This third collection of the fantasy artwork of Virgil Finlay (1914-1971) again presents examples of the artists genius with a pen.

The emphasis is placed on Finlay's pre-1955 artwork from such magazines as Famous Fantastic Mysteries, Fantastic Novels, Startling Stories, Thrilling Wonder Stories, and other pulp publications of that period.

The book is in the same format as its T975 and 1978 predecessors, and the combined three volumes bring to more than 360 the number of drawings collected between hard covers.

Most of the illustrations in this volume are reproduced in their original size. Most show examples of Finlay's fine pen work and use of the stipple and cross-hatch techniques that made him the most popular artist in the fantasy magazine field. Finlay sold his first drawings to Weird Tales in T935 and continued to do magazine art until shortly before his death.

During his career Finlay not only appeared in virtually every science fiction publication, but had the opportunity to illustrate stories by the top names in the field - A. Merritt, Henry Kuttner, Fletcher Pratt, lack Vance, H.P. Lovecraft, H. Rider Haggard, Edmond Hamilton, Ray Bradbury, Austin Hall, and numerous others. In the years since his untimely death, Finlay's fame and following have expanded beyond the confines of the fantasy field. This book is designed to provide that growing audience with further examples of the mans unique talent.