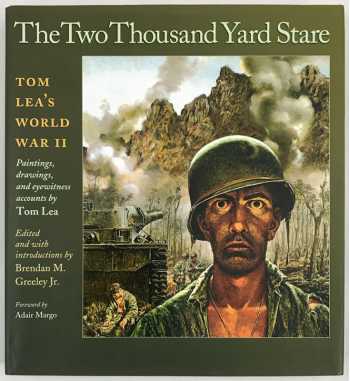 Few artists saw World War II from as many perspectives as El Paso artist and writer Tom Lea. Commissioned by Life magazine to paint the war as it was being experienced by U.S. and Allied troops, Lea went aboard a Navy destroyer in the North Atlantic to cover the fight against the German U-boats in late 1941; was on the carrier Hornet days before its sinking during the desperate air and sea battles off Guadalcanal in 1942; recorded the struggles of Army Air Forces transport, fighter, and bomber crews in England, North Africa, and China in 1943; and hit the bloody beaches at Peleliu with the assault waves of the 7th Marines in 1944. He was preparing to join forces poised to invade the home islands when the Japanese surrendered in 1945.

In The Two Thousand Yard Stare, Brendan M. Greeley Jr. has collected virtually all of Tom Lea's firsthand written accounts of his assignments for Life, including a previously unpublished diary and letters to fellow Texas writer J. Frank Dobie, along with Lea's powerful sketches and unforgettable paintings. Greeley places them in context, along with photographs and informative details on the people, places, and wartime events encountered by Tom Lea.

Thoroughly documented and filled with telling illustrations, this book will leave a stunning impression on those interested in the realistic depiction of war, in both images and words. Also a must-read for students, scholars, and collectors of Tom Lea's work, The Two Thousand Yard Stare brilliantly captures the artistic skills and spirit of one of America's most compelling painters and writers.