Sign in | Register
HomeAnimation & FilmThey Drew as They Pleased, Vol. 2 : The Hidden Art of Disney's Musical Years (The 1940s - Part One) - Signed 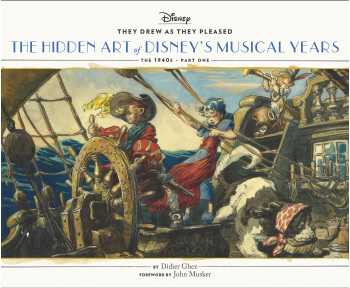 The 1940s ushered in an era of musical experimentation and innovation at the Walt Disney Studios.

Artists from all over the world flocked to California to be part of the magic, and their groundbreaking styles influenced such classics as Dumbo and Bambi as well as shaped the masterpieces that followed such as Alice in Wonderland and Peter Pan. For this volume, author Didier Ghez has unearthed hundreds of enchanting images from early sketches to polished concepts for iconic features by five exceptional artists who shaped the style of the Studio's animation during this period of unbridled creativity. With evocative descriptions and excerpts from the artists' journals and autobiographies, this magnificent collection offers a rare look at the visionaries who breathed life into some of the most beloved films of our time.

Didier Ghez is the author of Disney's Grand Tour and Disneyland Paris: From Sketch to Reality, and the editor of the Walt's People book series. He lives in Florida.John Musker is a 38-year veteran of Walt Disney feature animation. Among the films he co-wrote and directed with Ron Clements are The Little Mermaid, Aladdin, Hercules, Treasure Planet, The Princess and the Frog, and Moana. He lives in Los Angeles.

"Didier Ghez has brought to light numerous discoveries, from early Jiminy Cricket designs by Albert Hurter to documents by Gustaf Tenggren for The Sorcerer's Apprentice With material culled from personal letters, journals and anecdotes from friends, family and coworkers, this unprecedented portrait of these artists comes to life, revealing how they helped shape the Walt Disney Studio, and how they continue to inspire us to this day." -Animated Views