Sign in | Register
HomeAnimation & FilmThey Drew as They Pleased, Vol. 5: The Hidden Art of Disney's Early Renaissance: The 1970s and 1980s 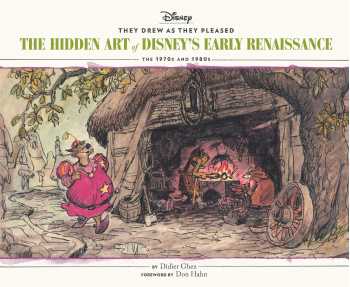 In the 1970s and 1980s, the Disney animation studio redefined its creative vision in the wake of Walt Disney's death. This latest volume from renowned Disney historian Didier Ghez profiles Ken Anderson and Mel Shaw, whose work defined beloved classic Disney characters from films like The Jungle Book, The Aristocats, Robin Hood, and The Rescuers. With vivid descriptions of passages from the artists' autobiographies and interviews, accompanied by never-before-seen images of their art and process, this visually rich collection offers a rare view of the Disney leg¬ends whose work helped shape the nature of character and story development for generations to come.

"A strength of this book is that it does focus on the films through the lens of Anderson and Shaw's work, diving deep into their entire careers at Disney. It is a biography of them as much as it is a book of art, and I really appreciate the attention to detail. Half of the fun of books like this is following the process of sketch to screen, and by making the men behind the drawings very real, it really adds to the story."                                                 -Cultured Vultures

"Didier Ghez's series for Chronicle Books under the umbrella title 'They Drew as They Pleased' has been the most consistently excellent series of Disney art books of the last few decades...The reason is not hard to spot, especially when you read Ghez's preface for the newest volume. He has an affection for the drawings reproduced in the books, and an absorbing interest in them, that other writers simply cannot match."                    - Michael Barrier