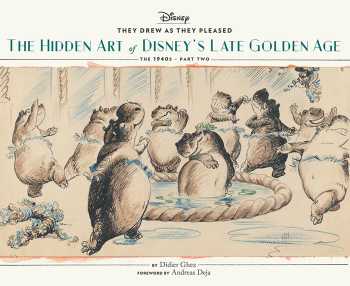 "This book tells the story of each of these artists - Eduardo Sola Franco, Johnny Walbridge, Jack Miller, Campbell Grant, James Bodrero and Martin Provensen - with ample examples of their artistry. The book also contains new facts and finds, uncovered by Ghez during the course of his research, including the only known photograph of Bela Lugosi posing as "Chernabog" for Fantasia, abandoned sequences for Dumbo, and a hilarious selection of unused screwball characters, created by Walbridge, for the Tulgy Wood sequence in Alice in Wonderland. And that's just the tip of the iceberg.
"These books are absolutely vital, visually delightful and masterfully written."
-- Jerry Beck, Cartoon Research

Walt Disney always envisioned the studios that bear his name remaining relevant by consistently taking creative risks and doing the unexpected. Heading into the 1940s, he crafted an entirely new division of the studio called the Character Model Department, which focused solely on the details of character development. This latest volume from famed Disney historian Didier Ghez profiles six remarkable artists from that department, sharing uncommon and never-before-seen images of their influential work behind the scenes. With vivid descriptions and passages from the artists' journals, this visually rich collection offers a rare view of the Disney artists whose work gave rise to many classic Disney characters, and who ultimately rewrote the future of character creation in animation.

Andreas Deja has worked as a Disney animator for over 30 years on many films, including The Little Mermaid, Beauty and the Beast, Aladdin, The Lion King, Lilo & Stitch, and The Princess and the Frog. He was recently named a Disney Legend by the Walt Disney Company.