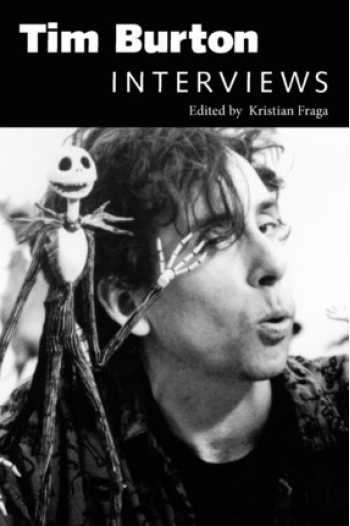 Starting his career as an animator for Disney, Tim Burton made his feature film directorial debut with the visually dazzling, low-budget Pee-Wee's Big Adventure. When it became a surprise blockbuster, studios began to trust him with larger budgets and the whims of his expansive imagination. Mixing gothic horror, black comedy, and oddball whimsy, Burton's movies veer from childlike enchantment to morbid melancholy, often with the same frame.

His beautifully designed and highly stylized films-including Batman, Edward Scissorhands, Beetlejuice, Big Fish, Sleepy Hollow, and Ed Wood-are idiosyncratic, personal visions that have found commercial success. In Tim Burton: Interviews, the director discusses how animation and art design affect his work, how old horror films have deeply influenced his psyche, why so many of his protagonists are outcasts, and how he's managed to make personal films within the Hollywood system. He gives tribute to writers he's worked with, his favorite actors-including Johnny Depp and Vincent Price-and talks enthusiastically about pulp horror fiction and the works of Edgar Allan Poe.

These interviews show his progression from an inarticulate young director to a contemplative and dry-witted artist over the course of twenty years. In later interviews, he opens up about being in therapy and how his childhood fantasies still affect his art. Tim Burton: Interviews reveals a man who has managed to thrive inside Hollywood while maintaining the distinctive quirks of an independent filmmaker.

Kristian Fraga, New York City, wrote and directed the award-winning PBS documentary The Inside Reel: Digital Filmmaking. He is a founding partner of Sirk Productions, LLC, a Manhattan-based film and television production company.