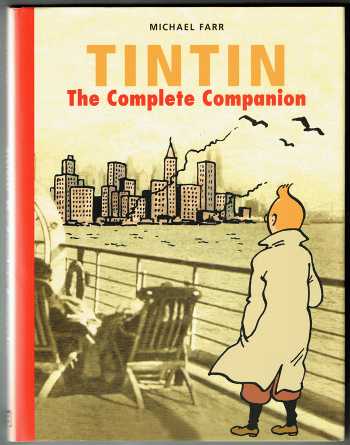 Out of print. A fully illustrated guide to the world-famous comic character Tintin, and his adventures. This well-researched and gorgeously presented overview follows Tintin through the 23 titles of the complete series. Tintin is the classic example of groundbreaking graphic narrative that all others can be compared to. Written and drawn between 1929 and 1976, the 23 adventures of Tintin, his dog Snowy and an unforgettable cast of characters has become a defining standard of graphic literature.

The Complete Companion contextualizes the work of Tintin's creator, Herge, and places it in its historical context. Author Michael Farr shows Herge's drawings side by side with their references, demonstrating how he established believable backgrounds and realistic details. The Companion includes a large number of sketches, which Herge would re-work and polish until he found the clearest, most easily readable line-giving birth to a style that would later be called Clear Line.

"Hundreds of fascinating illustrations juxtapose the artist's drawings with archival photo references.... Recommended for Yankee Tintinphiles and teens and up." - The Library Journal

Michael Farr is the world's leading Tintinologist, an expert on the comic series Tintin and its creator, Herge. He has written several books on the subject as well as translating several others into English. Farr was a reporter and foreign correspondent for Reuters and then the Daily Telegraph. He was soon sent to many of the destinations familiar to Tintin, including Africa, the former Soviet Union, and Central and eastern Europe. When based in Brussels, he became acquainted with the creator of Tintin, Herge, and was later to have access to his extensive archives.