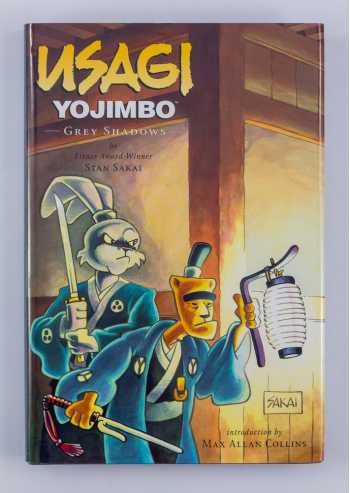 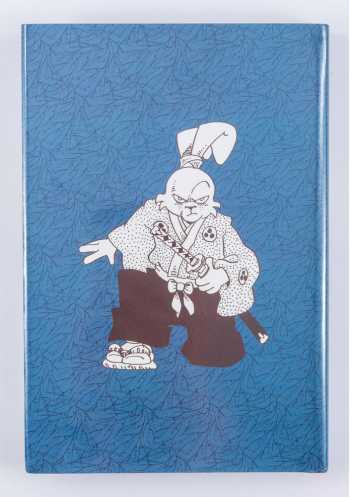 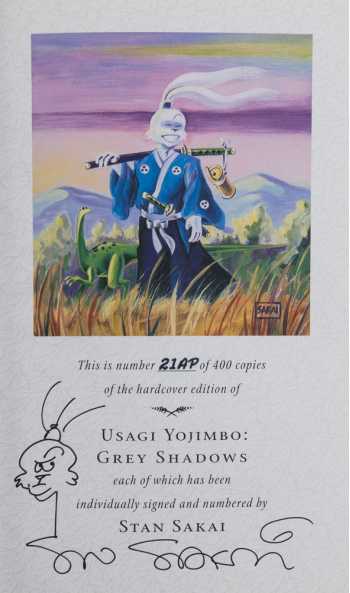 "This is number 21AP of 350 copies of the hardcover edition ... each of which has been individually signed and numbered by Stan Sakai." It has a bound-in limitation page with an exclusive color illustration and Stan has drawn a small Usagi headsketch next to his name.

Fresh from winning the Best Serialized Story 1999 Eisner Award for Grasscutter, Stan Sakai returns with a new Usagi Yojimbo collection featuring six tales of the ronin rabbit's journeys and adventures in feudal Japan. "My Father's Swords" retells an encounter with a young samurai who follows in-and is followed by-the footsteps of his father's warrior heritage. In "The Demon Flute," a village is plagued by a music-playing supernatural killer. Usagi recounts a classic Japanese folk tale in "Momo-Usagi-Taro." Two Tokugawa-era whodunits play out in "The Hair Pin Murders" and Tameshigiri," a pair of Inspector Ishida mysteries. Usagi becomes entangled in a conspiracy to overthrow a lord's throne in "The Courtesan." Memory, mystery, and treachery intermingle to form Grey Shadows.