Our Big 4th of July Sale Ends Tuesday at Midnight! 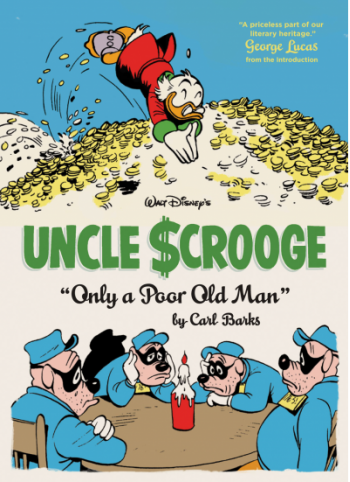 Since Fantagraphics' first release in this series focused on Donald Duck, it is only right that the second focus on Carl Barks's other great protagonist, and his greatest creation: The miserly, excessively wealthy Scrooge McDuck, whose giant money bin, lucky dime, and constant wrangles with his nemeses the Beagle Boys are well-known to, and beloved by, young and old.

This volume starts off with "Only a Poor Old Man," the defining Scrooge yarn (in fact his first big starring story) in which Scrooge's plan to hide his money in a lake goes terribly wrong. Two other long-form classics in this volume include "Tralla La La" (also known as "the bottlecap story," in which Scrooge's intrusion has terrible consequences for a money-less eden) and "Back to the Klondike" (Barks disciple Don Rosa's favorite story, a crucial addition to Scrooge's early history, and famous for a censored bar brawl that was restored in later editions). Each of these three stories is famous enough to have its own lengthy Wikipedia page.

Also in this volume are the full-length "The Secret of Atlantis," and over two dozen more shorter stories and one-page gags.

Newly recolored in a version that combines the warm, friendly, slightly muted feeling of the beloved classic original comic books with state-of-the-art crispness and reproduction quality, the stories are joined by another volume's worth of extensive "Liner Notes," featuring fascinating behind-the-panels essays about the creation of the stories and analyses of their content from a world's worth of Disney and Barks experts.