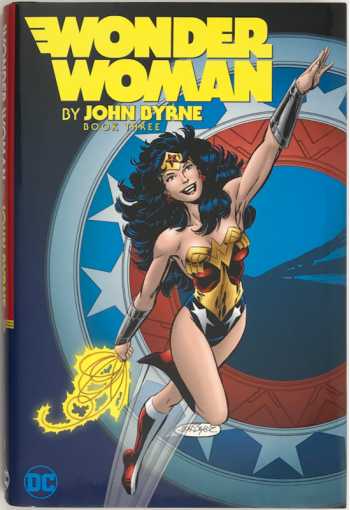 The final set of 1990s stories written and illustrated by superstar comics creator John Byrne is collected for the first time in Wonder Woman by John Byrne Vol. 3.

After being captured by Neron and caged in his hellish realm, Wonder Woman manages to rescue her friends and loved ones from his demonic clutches--but the price she pays is high. Struck down by Neron's power, the Amazon Princess is trapped in a coma, her body intact but her soul ravaged. As her life force slowly drains away, every hero and champion of Man's World rallies to her side--but in the end, only the person closest to her can bring Diana back from the dead.

As Wonder Woman returns to the mortal realm, a new threat arises that confounds explanation. A mysterious entity known as Egg Fu has been abducting innocent people and it's up to the Amazing Amazon, Artemis, Cassie Sandsmark, and Donna Troy to stop it. But what sinister purpose does Egg Fu serve--and how does it connect to the cataclysmic changes being wrought on New Genesis and Apokolips?

Finally, past and present collide in the ultimate showdown between the champions of light and the forces of darkness--and the fates of Princess Diana, Queen Hippolyta, Donna Troy, and the gods themselves are laid bare. But in the end, who is destined to claim the mantle of Wonder Woman?

Born in England and raised in Canada, John Byrne discovered superheroes through The Adventures of Superman on television. After studying at the Alberta College of Art and Design, he broke into comics first with Skywald and then at Charlton, where he created the character Rog-2000. Following his tenure at Charlton, Byrne moved to Marvel, where his acclaimed runs on The Uncanny X-Men and The Fantastic Four soon made him one of the most popular artists in the industry. In 1986 he came to DC to revamp SUPERMAN from the ground up, and since then he has gone on to draw and/or write every major character at both DC and Marvel.