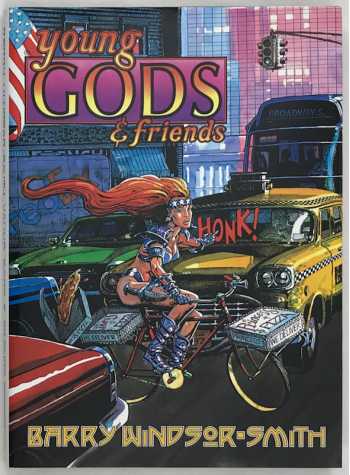 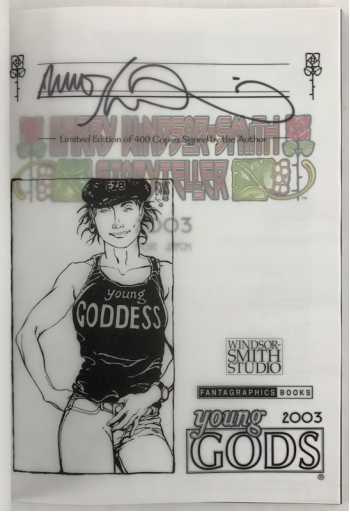 A pristine copy of the limited, signed edition of Barry Windsor-Smith's Young Gods and Friends. Featuring a specially designed and signed page printed on vellum, this edition is limited to 400 copies, significantly fewer copies than the limited editions of either Opus volume or the newly released Monsters.

While bearing a superficial resemblance to Marvel Comics' The Mighty Thor, a 1960s series by Stan Lee and Jack Kirby, the story and characters of Young GODS & Friends are sexy, ribald, politically incorrect, and outrageously funny. On the evening prior to a spectacular galaxy-spanning wedding, the reluctant groom, Prince Heros, son of Otan, Ruler of All-Worlds, needs one last adventure before succumbing to life in a marriage of convenience and political intrigue. With his boyhood friend and cousin Strangehands, Heros of All-Worlds sets off across the Abraxus Nebula for a night of innocent adventure, recreating their childhood passion for "dragon chasing." Amusing circumstances dictate that the royally gorgeous yet foul-mouthed spitfire Princess Adastra, older sister of the bride-to-be Celestra of Orgasma, shall be coming along for the dragon ride that, through the mysteries of time and space, lasts considerably longer than just one night. Thus begins this odyssey of three errant gods with entirely mismatched goals and personalities seeking fun across the universe. This volume collects the entirety of the artist's Young GODS stories from the acclaimed Barry Windsor-Smith: STORYTELLER comic book series from the 1990s, including the hotly-anticipated, previously unpublished issues 10 and 11, plus new story material created especially for this edition. BWS: STORYTELLER presented Young GODS, The Paradoxman, and The Freebooters, three fresh, new comics series written and drawn by Windsor-Smith, in a novel format that rotated each monthly series into the lead feature. Widely regarding these entertaining and literate tales as the best comics work of the artist's career, Windsor-Smith's 30-year fan base was crushed when STORYTELLER's schedule came to an abrupt and premature halt with issue 9, in 1997, with BWS claiming lack of support and bad faith on the part of the original publisher. Beginning with Young GODS & Friends in 2003, Fantagraphics is collecting each of BWS: STORYTELLER's titles into separate full-color editions including all of the stories published in issues 1 through 9, and, in the case of Young GODS & Friends, many never-before-published pages, plus background information and behind-the-scenes art.