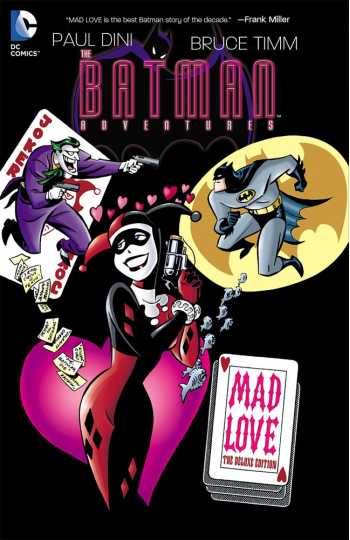 Written and drawn by the masterminds behind the critically acclaimed Batman: The Animated Series, Paul Dini and Bruce Timm, this Batman one-shot reveals the origins of Harley Quinn as she proves her love to the Joker by trying to eliminate the Dark Knight on her own!

Batman Adventures: Mad Love Deluxe Edition collects the comics debut of Harley Quinn, one of the most popular--and controversial--characters in the DC Universe. Though seemingly a comic made for children, within the pages of this now-classic book is a complex tale written by two storytellers that transformed a simple cartoon about the Dark Knight into a deeply layered noir television series. Don't be fooled by it's appearance-- Batman Adventures: Mad Love Deluxe Edition is one of, if not the finest Harley Quinn story ever written.