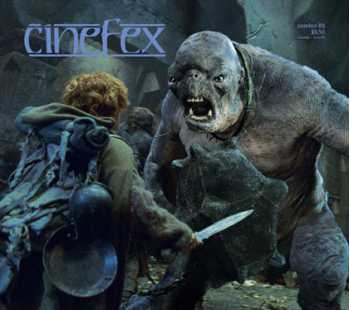 The Lord of the Rings: The Fellowship of the Ring: Ring Masters - Article by Jody Duncan

In a marathon effort that has won raves from critics, recognition from peers and the admiration of legions of moviegoers, New Zealand director Peter Jackson accomplished the seemingly impossible - a faithful, live-action adaptation of J.R.R. Tolkien's The Lord of the Rings: The Fellowship of the Ring, with two more installments to follow.
Working with a dedicated crew at Weta, his homegrown effects facility, Jackson relied on Kiwi ingenuity to overcome unimaginable hurdles, executing some 1500 visual effects that included the development of a breakthrough crowd simulation program with 'thinking' characters capable of autonomous behavior.

The Time Machine: The Shape of Things to Come - Article by Joe Francis

In his remake of the classic tale, The Time Machine, director Simon Wells called upon visual effects supervisor James Price and lead effects house Digital Domain to help bridge a narrative gap that spanned some 800,000 years.
While Digital Domain was responsible for many of the movie's signature time travel scenes, practical creature effects were the work of Stan Winston Studio and KNB EFX Group, and special effects supervisor Matt Sweeney oversaw creation of the fabled machine.

Black Hawk Down: Under Fire - Article by Joe Fordham

Based on a nonfiction account of a 1993 military incident that occurred in Mogadishu, Somalia, Black Hawk Down recounts the disastrous mission and daring rescue of an elite force of U. S. Army troops, whose attempts to curb terrorist tactics by a Somali warlord were thwarted when they were ambushed by thousands of his militiamen.
Ridley Scott directed the harrowing cinematic reenactment, relying heavily on in-camera effects by special effects supervisor Neil Corbould, and digital enhancements by Mill Film and Asylum Visual Effects.