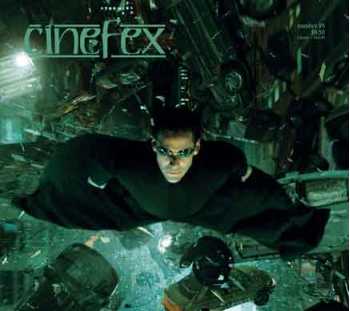 Delivering the first of two sequels to their 1999 hit, The Matrix, which took audiences by storm with its tale of alternate realities, the Wachowski Brothers are back with The Matrix Reloaded. This time, returning visual effects supervisor John Gaeta and an international array of visual effects vendors — led by ESC Entertainment — advanced synthetic imaging techniques and motion capture technology. The results are virtual-world visuals that defy description and action scenes whose complex choreography and camera work reflect a total liberation from real-world constraints.

Terminator 3: Rise of the Machines
Winds of War
Article by Barbara Robertson

In Terminator 3: Rise of the Machines, director Jonathan Mostow picks up the reins of James Cameron's futuristic tale, introduced in his breakout film The Terminator and revisited in the sequel, Terminator 2: Judgment Day. Back for a return engagement are the film's star, Arnold Schwarzenegger, as well as creature creator Stan Winston and the maestros of Industrial Light & Magic, who pushed the saga to new heights with a powerful blend of cutting-edge animatronics and digital technology used to depict the Terminator and an even deadlier threat from the future - a T-X female cyborg.

Spy Kids 3D: Game Over
Comin' at Ya!
Article by Joe Fordham

Maverick filmmaker Robert Rodriguez, whose credo of low-budget filmmaking was put to the test in the immensely popular Spy Kids series, offers up a third eye-popping installment in the franchise — Spy Kids 3D: Game Over. Having shot the film in digital video and anaglyphic stereo, Rodriguez — who wore many hats including that of visual effects supervisor — worked with an array of vendors to produce some 850 effects shots, most rendered twice for stereoscopic effect.