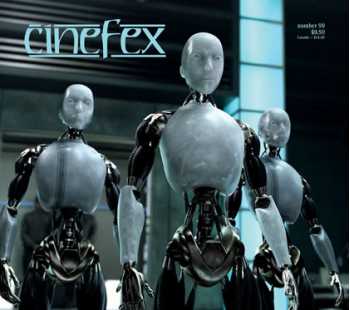 I, Robot
Ghosts in the Machine
Article by Jody Duncan

As the world's most advanced domestic robot is about to undergo mass distribution, one of them is accused of murdering a human in apparent violation of the immutable Thee Laws of Robotics. Actor Will Smith plays a detective assigned to the case in director Alex Proyas' near-future film, I, Robot, based on Isaac Asimov's classic short story collection. Supplying computer generated robots and futuristic environments were visual effects crews at Digital Domain and Weta Digital.

Alien Vs. Predator
Predator and Prey
Article by Jody Duncan

In an ancient pyramid beneath the Antarctic ice shelf, iconic monsters from two celebrated film franchises battle each other and a team of hapless scientists in director Paul W.S. Anderson's science fiction thriller, Alien Vs. Predator. Practical creature effects for the Prague-based production were created by Alec Gillis and Tom Woodruff Jr. of Amalgamated Dynamics Incorporated, while visual effects supervisor John Bruno directed the work of five English and Czech effects houses, which together produced nearly 500 visual effects shots in only three months.

With a new director at the helm — Alfonso Cuaron — Harry Potter and the Prisoner of Azkaban rejoins the young wizard-in-training as he returns for his third year at Hogwarts amid concerns that he is being stalked by an infamous murderer who has escaped from prison. Providing massive effects support to the third film based on J.K. Rowling's bestselling novels were series regulars including special effects supervisor John Richardson, creature and makeup effects designer Nick Dudman, and eight visual effects houses under the supervision of Roger Guyett and Tim Burke.

Reluctant superhero Peter Parker, yearning for a normal life, continues to pine for Mary Jane Watson while attending college and battling a new adversary in the form of Doc Ock, a fiendish genius with mechanical tentacles fused to his body. Enlisted by returning director Sam Raimi to provide digital effects for Spider-Man 2 were visual effects designer John Dykstra and the team at Sony Pictures Imageworks. Providing on-set animatronics for the production was animatronic supervisor Steve Johnson and his Edge FX company.