Sign in | Register
HomeNew ArrivalsDiana: Princess of the Amazons 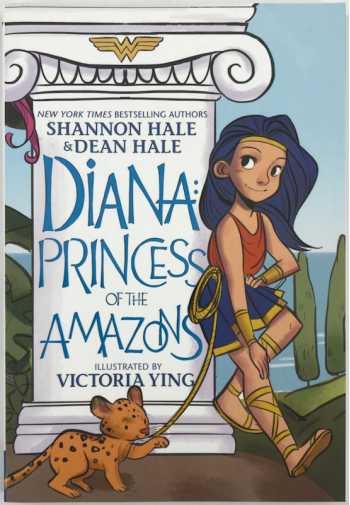 Eleven-year-old Diana has an almost perfect life on the island of Themyscira. But even though she has a loving mother and many aunties, she is an only child. The only child on the entire island, in fact. Every other person on the island is an adult who's the best in their trade and mighty in body, while Diana is small, sometimes clumsy, and not particularly good at anything. She's not Wonder Woman...yet.

What Diana needs is someone her own age whom to talk to. Taking matters into her own hands, she creates a playmate out of clay. It's all fun and games for a while, until things get out of control and Diana has to decide whether she's made a new friend...or a monster!

Shannon and Dean Hale are the husband-and-wife writing team behind Eisner-nominee Rapunzel's Revenge (illustrated by Nathan Hale), New York Times best-selling series The Princess in Black (illustrated by LeUyen Pham), and two novels about Marvel's Squirrel Girl. Shannon Hale is also the author of the Newbery Honor-winning novel Princess Academy, the USA Today best-selling Ever After High series, the graphic novel memoir Real Friends, and others. Shannon and Dean live in Utah with their four children, who all agree that Wonder Woman is one of the greatest superheroes of all time.

Victoria Ying is an author and artist living in Los Angeles. She started her career in the arts by falling in love with comic books, which eventually turned into a career working in Animation. She loves Japanese curry, putting things in her shopping cart online and taking them out again and hanging out with her dopey dog. Her film credits include Tangled, Wreck-it Ralph, Frozen, Paperman, Big Hero 6, and Moana. She has illustrated several picture books including Not Quite Black and White, Lost and Found What's that Sound, and Take a Ride by My Side, and is the writer and illustrator of Meow! Diana, Princess of the Amazons is her debut graphic novel.