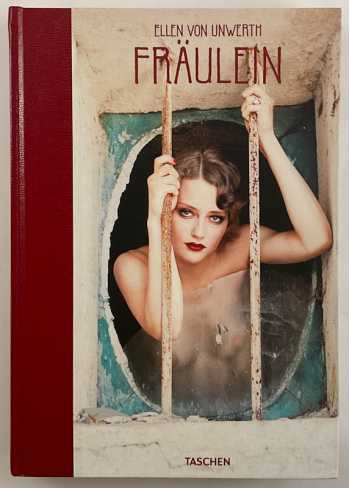 This is the first trade hardcover edition (2011) after Taschen's limited collector's edition published in 2009! At 10 x 14 inches, this edition is more than big enough at a fraction of the price.

Decadence, kitsch humor, and sexual intrigue meet in Ellen von Umwerth's homage to the world's most beautiful female icons. Whether in cheeky lingerie or nothing but a million-dollar smile, models from Dita Von Teese to Britney Spears share their personal fantasies or reveal a guarded facet of their femininity. These images effortlessly combine fashion and fantasy like never before.

Switching effortlessly between color and immaculate black and white, von Unwerth's photography revels in sexual intrigue, femininity, romance, fetishism, kitsch humor, decadence and sheer joie de vivre. Whether nude or in lingerie and a dazzling smile, her subjects are never objectified. Some flaunt personal fantasies; others are guarded, suggesting that we have stumbled into a secret world. Fashion and fantasy were never so enchantingly combined. These images were shot over the last 15 years and many are previously unpublished.

Ellen von Unwerth worked as a top fashion model for 10 years, before taking up the camera and becoming one of the world's most in-demand fashion photographers. Her editorial work has featured in countless magazines, including Vogue, Interview, Vanity Fair and i-D, while her major advertising campaigns include Victoria's Secret, Banana Republic, Guess, Diesel, and Chanel. In 1991 she was awarded first prize at the International Festival of Fashion Photography, and her work was featured in Archaeology of Elegance (2002) and Fashioning Fiction at MoMA/Queens (2004). Her many individual exhibitions include a one woman show at the Hamilton Gallery in London, and her photo-novella Revenge (2003) was accompanied by exhibitions in New York, Paris, Amsterdam, Hamburg, Moscow and Beijing.

Ingrid Sischy is a Contributing Editor for Vanity Fair. A former staff writer, photography and fashion critic at The New Yorker, she was editor in chief of Interview, 1989-2008. She has profiled Keith Haring, David Hockney, Jeff Koons, Nicole Kidman, and Madonna, among many others.