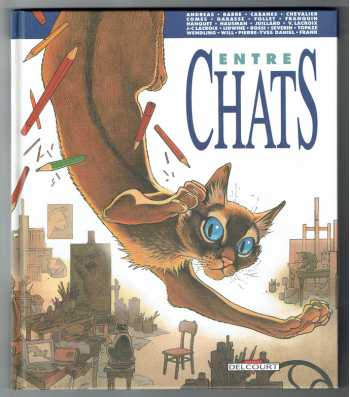 Fascinated by a bronze statue bought at a flea market, a man seeks to penetrate the mystery of the big cats. 'There is, in the way the cat looks around him, more to learn than in the wild imaginings of all the philosophers.' Multiplying his approaches (scientific, historic, mystic, intuitive), our hero sinks into an obsession not far from madness... The album is structured in an original way : the main story is made up of texts and illustrations by Frank. On top of this, short comics and images illustrate the research of the hero. Frank directed the album, with contributions by Juillard, Cabanes, Follet, Rossi, Andreas, Barbes, Wendling, Lidwine and Franquin, with beautiful drawings never published before.