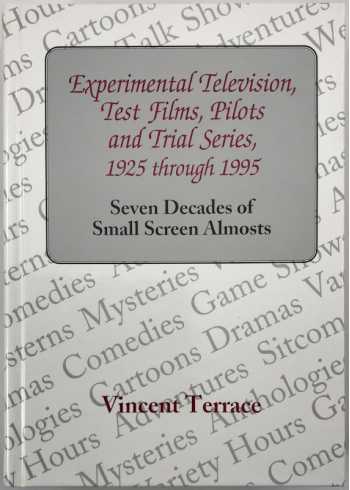 When I was young, with only three television networks to choose from, the oddball pilot or summer series, good or bad, was a treat. They are only vaguely remembered now if at all. This thoroughly intriguing book describes over 3,000 experimental television programs that almost became a series will jog your memory if you are old enough.

Test films, pilots, trial series, limited runs, summer tryouts--by whatever name, televison networks have produced thousands of experimental shows that never made it into the regular line-up. Some were actually shown, but failed to gain an audience; many others never even made it on the air. This work includes over 3,000 experimental television programs, both aired and unaired, that almost became a series. Each entry includes the name of the show, length, network, air date (if appropriate), a fact-filled plot synopsis, cast, guest stars, producer, director, writer, and music coordinator. Information for this work was gathered primarily by watching the shows, reading years' worth of press releases, and using sources such as TV Guide and Variety to augment the primary research.