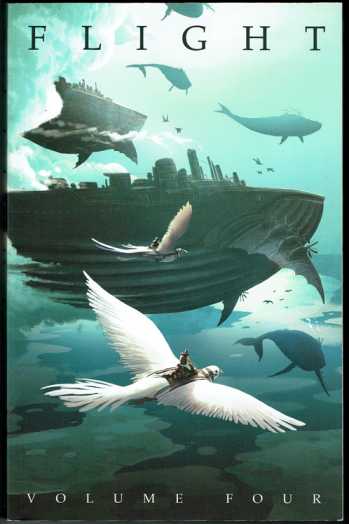 "The third sumptuously produced Flight anthology showcases some two-dozen talented cartoonists, most of whom usually work in Web comics and animation. Most are young, although as in Flight Volumes 1 (2004) and 2 (2005), a few veterans, notably animator Bill Plympton, appear - and prove even younger at heart. Several have illustrated children's books, others design video games, and the preponderance of their stories have young protagonists (often saving their elders through personal bravery) or feature elements that kids like, such as monsters and anthropomorphized "funny animals." The high quality of the contributions is impressively consistent, yet four deserve special mention: animator Michael Gagne's tale of a heroic young fox who defies a fearsome, subterranean beast; Johane Matte's hilariously kinetic depiction of a cat getting his comeuppance after terrorizing various birds; Israel Sanchez's account of a mischievous baby dragon's "Saturday"; and Phil Craven's saga of a youngster who saves a monster from hunters. That those standouts are all wordless or nearly so underlines the emphasis on the visual that is Flight's most notable strength."