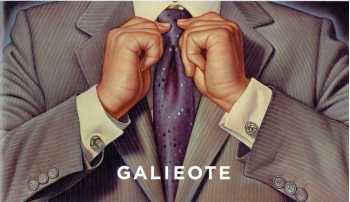 The exhibition was held at Arcadia Contemporary gallery in New York from May to June 2014.

At Disney Studios, Galieote worked for several years as one of their top, traditional character animators. The years at Disney not only allowed him to hone his skills in drawing and painting, but made him an expert in timing and movement whichhe feels are critical parts in the success of his artwork.

And while Galieotes paintings are stylistically inspired by The American Scenepainters, The Regionalists and WPA Artists of the 1930s and 1940s, it is his sense of irony and humor that is most assuredly 21st Century.