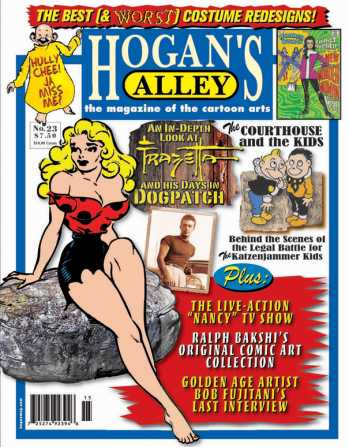 Temporarily out of stock.

Comic strip fans rejoice, the latest issue of "The Magazine of the Cartoon Arts" is here! Every issue is full of interesting articles and fun, quirky features on obscure regions of comic books, animation, and especially comic strips.

This issue is our customary blend of serious scholarship and old-fashioned fun. We think the long examination of the legendary Frank Frazetta's time working for Li'l Abner creator Al Capp will be a big hit with readers, and it's loaded with gorgeous Frazetta artwork (some supplied by his family) and information that filled in some blanks even for us! We're also excited by an in-depth look at the lawsuit that led to two versions of the seminal Katzenjammer Kids, with research into the legal archives that has never been reported. (The consequences of the legal precedent it set reverberate yet today.) We have a feature on a short-lived attempt to produce a live-action sitcom based on Ernie Bushmiller's Nancy, which will delight the many readers who expect something about Nancy in every issue.

The issue features a great deal more, of course: We have a long interview with Golden Age comic book and comic strip artist Bob Fujitani. It was the last interview he gave before he died, and it's filled with great, candid stories about the legends he worked with, including Will Eisner, Charles Biro, Lou Fine and many others. We take a lighthearted look at the best (and of course worst) superhero costume redesigns, the evolution of cartooning style in advertising, and the behind-the-scenes story of Jerry Seinfeld's advertising campaign with Superman. And we take a first-person, narrated tour of the comic art collection of legendary animator Ralph Bakshi, who discusses what appeals to him in cartooning--and what doesn't.

Of course, there's a great deal of fun content, too: our popular "Deja Viewed" department (expanded for this issue), a poll of cartoonists about their favorite cartoon animals, a look at the early days of the Charles Atlas ad campaign, and much more.