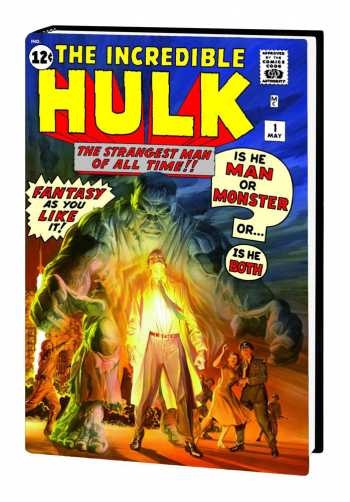 Dr. Robert Bruce Banner may have the appearance of a mild-mannered scientist, but after being caught in a gamma bomb explosion, he became the unstoppable engine of destruction know as the Incredible Hulk! Marvel is proud to present the tales of everyone's favorite man-monster from the very beginning: From the earliest Stan Lee and Jack Kirby issues that put an irradiated angle on the Dr. Jekyll/Mr. Hyde complex to the Steve Ditko's psychological slobbernockers in TALES TO ASTONISH and the Jade Giant's return to his solo series, this Hulk-sized collection is the foundation for every purple-pants'd adventure ever!

Featuring artwork by a who's who of Marvel Age luminaries and scripts by Stan "The Man" Lee, they'll introduce you to General Thunderbolt Ross; the tortured woman who loves both the man and the monster, Betty Ross; the Leader; the Abomination; and a series of earth-shaking fights between the Hulk and the Silver Surfer, Thor, Giant-Man, Namor, Hercules and more! Collecting the first adventures of the Jade Giant in one painstakingly restored volume with every page, every pinup and every letters column. Not to mention unused covers, critical essays and bonuses galore!