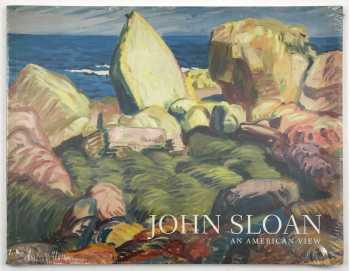 An illustrated catalogue prepared for the Krushaar Galleries' 2008 exhibition of work by John Sloan. 23 color plates and 9 etchings, plus photos of Sloan.

John Sloan is celebrated as one of the most distinguished American painters of the twentieth century. His portraits, landscapes, figure studies and genre scenes of New York, Gloucester and Santa Fe have resonated for art lovers and art historians alike. Sloan's rise to the challenge of color and form, combined with his uniquely American view, give us a body of paintings, drawings and prints that withstands the test of time.

The exhibition John Sloan: An American View chronicles work created by the artist during this period, wherein he explored both the daily life and landscape of a small New England fishing village and the mingling of European, Hispanic, and Native American cultures of the Southwest.