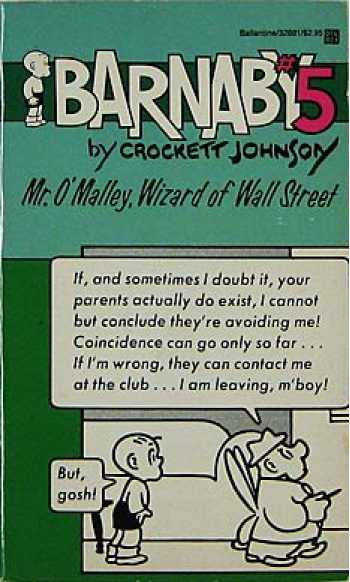 From the Crockett Johnson homepage:

After helping (and hindering) the investigation into the stolen furs, O'Malley decides to produce his own soap opera -- the "Grand Opera Soap Opera." Unable to find a sponsor, he decides to underwrite his own show by "going into trade." Soon, O'Malley Enterprises, Inc. is the talk of Wall Street; the story of the company's rise and fall deftly satirizes the speculative nature of the stock market. Jacob "Jake" Marley (formerly a businessman and presently a ghost) visits Gus during this episode. Next, Mr. Baxter takes Barnaby, Jane, and Gorgon on a picnic; while dad sleeps, Mr. O'Malley takes them to meet Emmy Lou Schwartz, "Licensed Witchcraft Practitioner, 98,413." Although she lives in a gingerbread house, she's never read Hansel and Gretel. So, Jane loans her copy to Emmy Lou. In the last episode of the book, Barnaby's Aunt Minerva (an author) comes to stay with the Baxters. Unlike Barnaby's parents, she finds Barnaby's references to O'Malley "utterly delightful." Though she doesn't meet the elusive Fairy Godfather, he -- with the help of printer's devil Shrdlu -- places his recipie in her newspaper column.