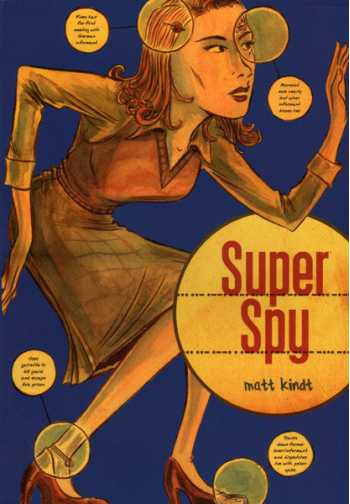 Don't miss the hit that blew Matt Kindt's career wide open: a critically-acclaimed spy thriller about cyanide, pen-guns, heartbreak and betrayal! Spanning the countries of Spain, France, and German during World War II, the graphic novel follows the intersecting life of six spies, exploring their small lies and deceptions, as well as the larger secrets they hide. A children's book is something more than it seems; a woman swims the English Channel to deliver a deadly secret; a German spy desperately seeks escape for herself and her daughter; and a spy continues to serve his country even beyond death. A gorgeous full-color graphic novel that not only reveals the nature of espionage, but how an individual can be lost in a world of lies and deception, and still manage to find redemption.

"Every now and then I get something really super special from someone with so much talent....I can't describe accurately how handsome this book he's created is. You have to pick it up and hold it in your hands to see for yourself. So go get it and be amazed."
-- Paul Malmont, author of The Chinatown Deathcloud Peril

"Kindt’s fluid outlines, thick swatches of color fill-in, sleek figures, and predominant subdued duotone coloring effectively conjure the ambiguous living hell that crushes the characters’ zeal while it forces them to go on until they’re stabbed, knifed, poisoned, or shot. The book rivals the power of the most complex and serious spy novels and films."
-- Booklist (starred review)