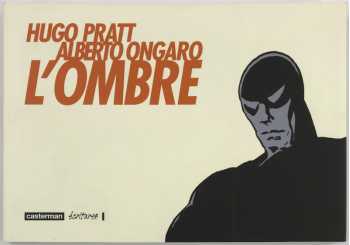 Contains three adventures of l'Ombre, a cool early work by Hugo Pratt. It is fun to see the strong influence of classic American comics strips (especially Milton Caniff) on Pratt. Text in French.

L'Ombre (The Shadow) is in the great tradition of masked avengers. As any good superman, he has a secret identity of course and has a paralyzing gas panoply, truth drugs, flying machines, hyper-powerful cars... His principal enemy, "the General", seeks all the gold cargoes of the world. This super-villain (also in the tradition of the comics) is assisted by a band of killers and an armada of strange robots and radio-controlled miniatures.