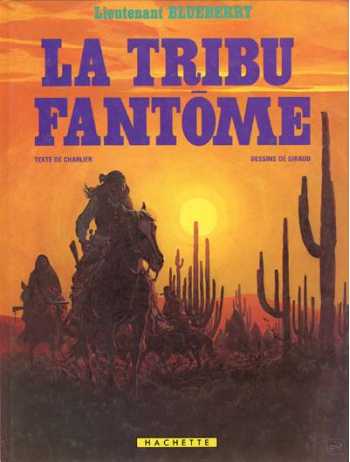 A particularly collectable copy of the First Edition ("depot legal. March 1982") of this famous episode in the Lieutenant Blueberry series from the team of Charlier and Giraud--this one signed by Giraud as follows: "pour l'amitie des peuples et la fin des barrieres--Gir." ("For the fellowship of mankind and the end of barriers--Gir")

Also included is the original press kit for its release: three text sheets and folder with Giraud b&w art.

Plus an invitation to a "reception on the occasion of the release of the 20th album of the Adventures of Lieutenant Blueberry" on March 29 in Paris. The invitation and envelope are addressed to Jean-Jacques & Alina Schpoliansky. Jean-Jacques Schpoliansky was and is the owner/director of the independent Le Balzac movie theater just off the Champs-Élysées. Le Balzac is described as "the chic-est cinema in Paris."

La Tribu Fantome was published in English as The Ghost Tribe.

Near Fine (very light bumps to the spine ends and corners, light rubbing to the covers, otherwise Fine)
Inscribed by the artis