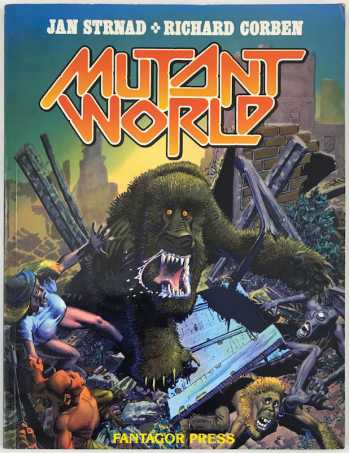 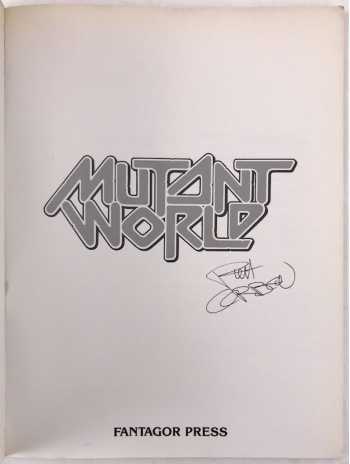 Signed by Corben! The first collection of this graphic novel originally serialized in Warren's 1984 magazine. For this edition, the original, uncensored dialogue has been restored and eight new pages added. Introductions by Jan Strnad and Richard Corben.

The reproduction is sharper than in the 2019 reprint.

Mr. Strnad says in his Introduction: "The most obvious challenge involved in scripting Mutant World was to guide a character whom I sympathized -- through a shattered, hostile land populated by ohter hungry mutants, militaristic busybodies, deceiving women, and at least one religious maniac without warm, nurturing aspect of human personality, to witness that even when mind and strength had gone, gratitude and a mutual tenderness still lived on in the heart of man. I failed dismally. Dimento is treated horribly by the other characters and I must shoulder the blame for his misfortunes."

Mr. Corben says in his own Introduction: "The idea of Mutant World was created about four years ago when Josep wanted me to do a series for his new Science Fiction magazine. I came up with several possibilites, including one about time travel and dinosaurs, another about Big Foot, and Mutant World. I originally conceived the series as an anthology of different stories and characters unified by the common setting of the ravaged ruined earth. However, one character grew in importance and dominated the whole series. This character, Dimento, is a direct descendant of the luckless snoot in the two page Heirs of Earth. I did a chapter and started another before I realized my anthology of stories weren't going to work as well as I had hoped. -- I went into a drought of creative ideas. I finally decided that -- I need help writing Mutant World. -- The result has much greater depth and humanity than I could ever approach."