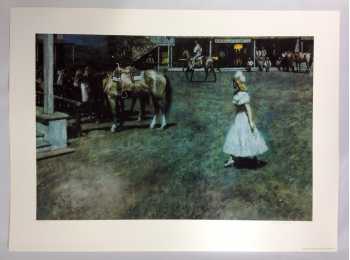 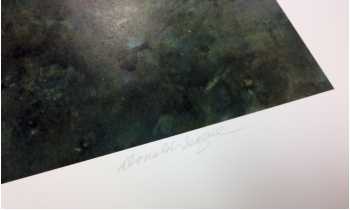 This painting won Teague the Silver Medal at the 1978 Cowboy Artists of America exhibition!

Donald Teague, N.A. (1897-1991) was born in Brooklyn, New York. From 1916 to 1917, he studied under Bridgman and DuMond at the Art Students League in New York. After serving in the Navy during WWI, he became the pupil of Norman Wilkinson in London. Upon his return to New York he continued his studies at the Art Students League under the tutelage of Dean Cornwell, who helped Teague begin his long art career as an illustrator in 1921. Because he was the primary illustrator for The Saturday Evening Post, he signed Collier's illustrations with another name, Edwin Dawes.

In the 1920's, Teague spent several summers on a Colorado ranch. When he moved to California in 1938, he specialized as a Western illustrator until Collier's ceased publication in 1958. After finishing his career as an illustrator, Teague devoted his entire time to painting.

His work has been exhibited in major museum collections throughout the world, including the Metropolitan Museum of Art, the Royal Watercolour Society, the Tokyo Museum, the Peking National Museum, the Brooklyn Museum, the Museum of Watercolor in Mexico City, Chicago's Art Institute, the Sydney Museum in Australia, the Virginia Museum of Fine Arts and the National Cowboy Hall of Fame.

Fine
One of 250 numbered copies signed by the artist