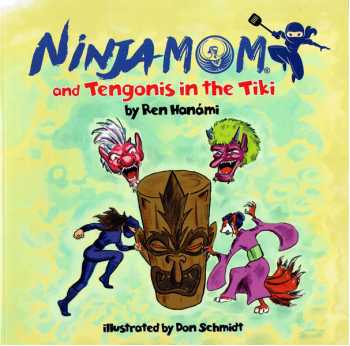 "It's time to begin your training in the art of ninjutsu, Kimi!" Today is the first day of young Kimi's ninja training. You see, her Ninja Mom comes from a long line of female ninja warriors, who were taught by a divine creature in the mountains of Japan. Now it's Kimi's turn to learn ninja skills from her beloved Grandma Bachan, who brings her a Hawai'ian tiki for good luck. But soon, Kimi will need more than luck when a group of monsters is accidentally unleashed from the tiki. She'll require the help of her Ninja Mom, inventor Dad, and warrior Bachan to complete her first ninja lesson. This cultural adventure marks the first release in Hanámi's NINJA MOM series-- inspired by the folklore and mythology from her own Japanese and Hawai'ian heritage. Each tale encourages young readers to address life's surprises with strength, positivity, and humor. Hanámi also fosters learning, by inserting Japanese and Hawai'ian words, highlighted throughout and also defined in a glossary. Vivid illustrations by Don Schmidt deliver colorful action, further bringing this NINJA MOM tale to life for readers of all ages.

Very Fine
Signed by the author and artist