Sign in | Register
HomeNew ArrivalsOctobriana and the Russian Underground - 1st 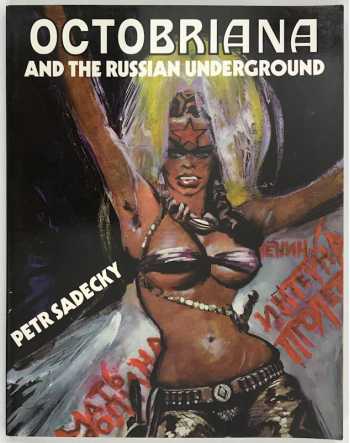 Octobriana, a kind of Russian Barbarella, is the spirit of the October Revolution, but she is also the spirit of opposition to established orthodoxy. Created in Kiev in the 1960s by a group of which Peter Sadecky was a member, Octobriana became the heroine of an illegal magazine, secretly printed and circulated by hand in a number of Universities, her perpetrators constantly eluding the authorities.

Peter Sadecky tells of his own involvement in the Octobriana set, of how the cult of Octobriana was born and developed, and how--after traveling to the remotest parts of the Soviet Union--he was eventually able to smuggle the material out to the West. A foreword by A. Anatoli Kuznetsov provides historical context.

Octobriana is a Russian comic superheroine created by Petr Sadecký and based on works by Bohumil Kone ný and Zden k Burian. As a character embodying Communist ideals, Octobriana was said to be usable by anyone who wanted, rather than being copyrighted by an author or corporation. Petr Sadecký had created a fictitious real life origin for the character, which he presented as true.

The supposed origin of the character was in actuality Sadecký's own creation. Petr Sadecký, while still in Prague, enlisted the help of two Czech artists, Bohumil Kone ný and Zden k Burian, in creating a comic centering on the character of "Amazona." Sadecký told the two that he had a buyer interested in the comic, and they worked together on writing and illustrating the Amazona comic. However, Sadecký betrayed his friends by stealing all the artwork and escaping to the West where, in his efforts to market the Amazona comic, he changed the dialogue, drew a red star on the character's forehead, and was successful only after turning Amazona into a fake political statement, "Octobriana: the spirit of the October Revolution". Major inconsistencies in his story, and a frame in his book where Octobriana is referred to as "Amazona" (p. 83), lend credence to this story. In addition, Burian and Kone ný sued Sadecký in a West German court, winning the case but never recovering all their stolen artwork. As Octobriana is still widely believed to be the product of dissident cells within the U.S.S.R., she is not copyrighted, and has appeared in a variety of artistic incarnations.