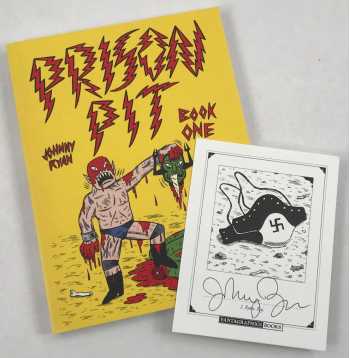 From 2009, a First Printing with a Signed Illustrated Fantagraphics Bookplate.

Prison Pit blends Angry Youth Comix creator Johnny Ryan's fascination with WWE wrestling, grindhouse cinema, first-person action video games, Gary Panter's "Jimbo" comics, and Kentaro Miura's "Berserk" Manga into a brutal and often hilarious showcase of violence like no other comic book ever created. Even the lead character's name, which is only one letter away from "Cannibal Duckface" (hint: Cannibal is correct) is unprintable.

Prison Pit is so deranged and twisted that even the author's plot description, while admirably reflecting the spirit of the book, has to be edited into a sea of asterisks in order to be bearable to normal human beings: A mysterious new a**hole has descended into the Prison Pit. He's looking for Cannibal F***face and he wants revenge. Revenge for what? Probably for some f***ed up evil s***. But before he can get his hands on the CanMan he's got to battle his way through some pretty vicious motherf***ers. S***s about to get real.