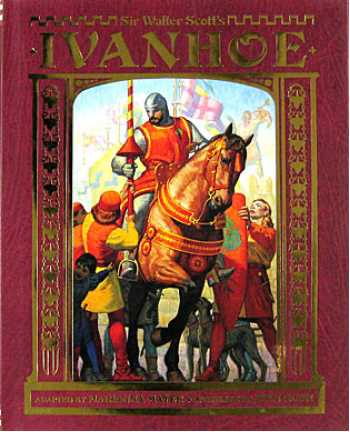 From the dust jacket:

"Ivanhoe - At the dawn of the Middle Ages, a gripping tale of chivalry and suspense emerges.

"Two distinguished knights - one Saxon, one Norman - have returned from the Crusades. Though they fought on the same side, they now have a score to settle.

"What begins as a joust between two rivals quickly escalates into clan-wide mayhem and a fast-paced series of battles for revenge, honor, and love.

"Sir Walter Scott's Ivanhoe was one of the first great historical novels of western literature. At last, this extraordinary work has been brought to life as a lavishly illustrated storybook.

"This exquisitely designed page-turning volume is perfect for anyone with a passion for adventure.

"Marianna Mayer has written many distinguished books for children, including The Twelve Dancing Princesses, The Unicorn and the Lake, and Young Jesus of Nazareth. She lives in Roxbury, Connecticut.

"John Rush is an award-winning artist whose work has appeared in galleries, on book covers, and in major magazines. He lives in Illinois."